Trip to the Maojian Tea Plantation 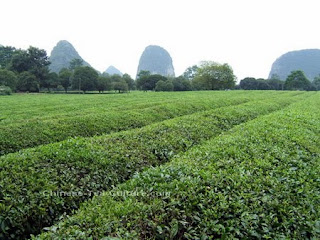 A friend of mine came to China for a visit. I told him when he came to Guilin I would guide him around and introduce him some new teas and take him to a tea plantation. He and his girlfriend spent seven days with me and we had a blast digging through my tea vault for teas he had never tried, and spending hours in my tea shops sipping teas.

One day of the visit, I took him to 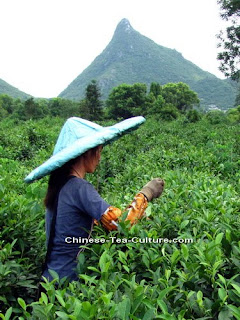 the Maojian Tea Plantation in Guilin. I often visit the plantation for a stroll. As I have mentioned in previous blogs, it is a fantastic way to spend an afternoon and it always ends up with a tea tasting.

My friend, his girlfriend, and I strolled through the tea fields, taking photos, and watching the tea pickers work their magic. The tea pickers were elderly and one of the couple's grandson was playing next to the fields. He had captured a beautiful iridescent but and had tied a string on it. This is a very traditional toy in China for countryside children. Sometimes they capture butterflies, small birds, dragonflies, or lizards and tie a string on it. The children love watching the insects and birds fly and it keeps them busy so the grandparents can work the fields.

The plantation was germinating new tea seedlings and we got to see how they do it. The tea seeds have to be planted almost immediately upon maturing, or they will either rot, or dry out. Either way, they will not germinate then. They are 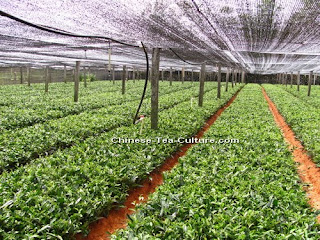 placed in the soil and the soil is kept damp and black plastic is kept above them to keep the sun from drying them out or overheating them. Once the trees are large enough, they are thinned and then finally, planted. It takes many years for a tree to mature enough to be picked, so they have to be planned well in advance. 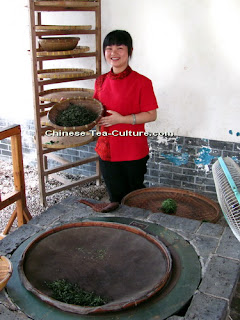 We then visited the visitor center where my friend and his girlfriend saw how the freshly picked leaves were fried, shaped, and dried. Afterwards, we chatted with the workers for a while before being invited to play volleyball with them. We had a blast playing and nobody kept score. It was just for fun. It was a fantastic day and one I plan to repeat often.
Posted by Scott Shangguan at 7:09 PM

Scott Shangguan
I am an American expat living in Guilin, Guangxi, China. I moved to China for my love of Chinese Tea. I study tea varieties, tea culture, tea history, brewing techniques, and tea antiques